​This picture was taken just after Brennan's hockey team finished their warmup. For this picture I had to go all the way down to the glass. I like how this picture captures the whole Brennan team and their fans. I decided to crop this picture to make less negative space. 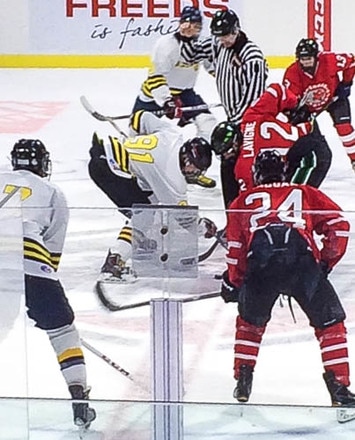 This picture was taken during a face-off in the first period. I tried my best to time it so both of the centres were attempting to win the draw. I also had to work around the glass of the penalty box as it always seemed to be in the way. For this shot I had to zoom in. I like this picture because of how it shows the aggression and fight that occurs in a game of hockey. 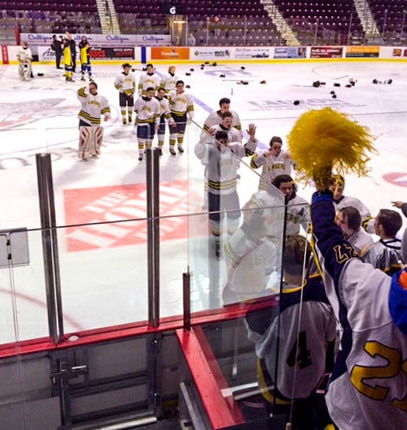 This picture was taken after St. Joes won Catholic Cup. They skated over to their biggest fans and showed their appreciating by tapping on the glass. This picture really helps give the viewer of what it was like at Catholic Cup or a hockey game in general. The fans play a huge role in the atmosphere of a hockey game. I tried to avoid the penalty box getting in the way the best I could. I like how this picture caputers the whole Laser hockey team.

This picture was taken at the end of the hockey game. The St. Joseph Lasers had beat the Brennan Cardinals in a hard fought game. This picture captures sportsmanship very well. Despite all the things that had happened during the game they shook hands. The Lasers were humble winners and the Cardinals weren't  sore losers. I went to the middle of the rink to take this picture. 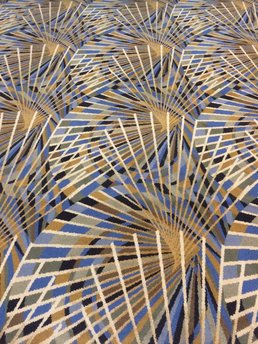 This is a picture of the carpet of Cobo Hall. This carpet takes up a big portion of the hall as it covers the area where all the entrances are. I found it really interesting because of the complex pattern. I also enjoy how the colours of the carpet work together. I took this picture standing up so I could capture a lot of the pattern because it is very big 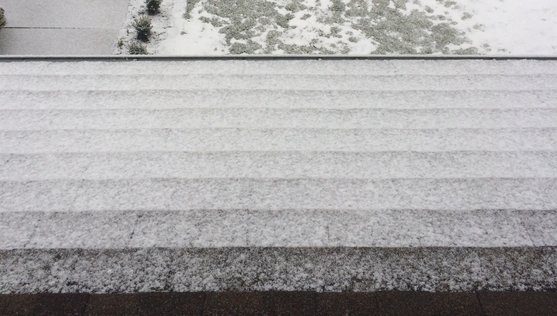 This is a picture of a roof after a snowfall. I find it fascinating how the snow made a such a clear pattern on the roof. I had to open my window so I wouldn't be taking a picture through the glass. 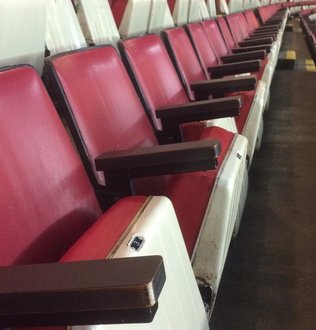 ​This picture was taken in the Joe Louis Arena, home of the Detroit Red Wings.The row of seats form the pattern. I like how the row of seats seems
as it goes on forever into the distance. I had to crouch down to get this
shot. For this shot I was in one of the highest rows and even with centre ice. I wanted to use this picture because it is going to be torn down at the end of the Detroit Red Wings season this year. 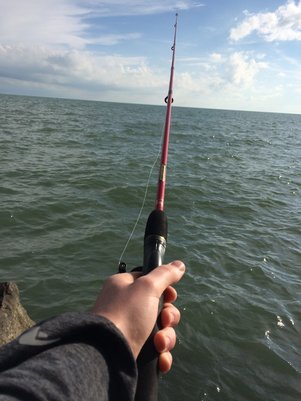 ​     This is a picture of me holding a fishing rod. This is Lake Erie. This picture  had to be taken with my right hand while I held the rod in my left. This was a challenge to take this picture as the rod was very long and hard to fit all of it in the frame. I thought this was a good picture because it shows just one of the many things we can do because of our hands. 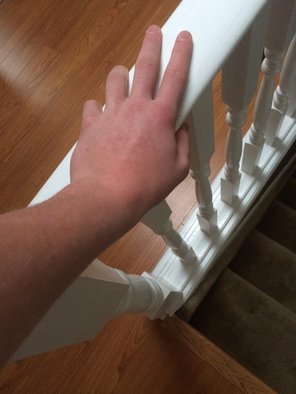 ​   This is me holding onto a railing of a stairwell. Most people don't need to hold onto a railing to go down stair. People who do are usually the elderly or someone of is tired. So this picture is trying to show that the person is tired and resting on the railing. There are leading lines from the railing that lead you to the focal point, the hand. 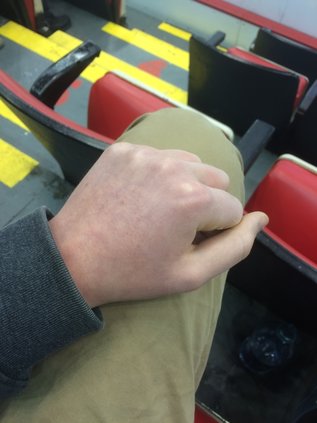 This is me with my hand on my leg while I'm sitting in a hockey arena. My hand is clenched in a fist because of the nature of hockey. It is a very fast paced sport with multiple things happening at once. It is a sport that puts you on the edge of your seat, especially when you are watching your favourite team. When you are watching the game from inside the arena it is very different from watching it at home. It is very easy to get into the game. When you are in the game during big plays you tend to tense up and that is what this picture is trying to portray. 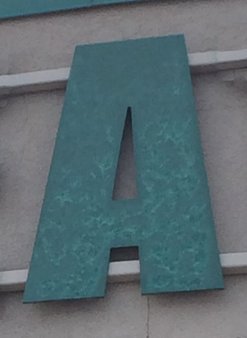 ​   This is an "A" from the sign on Tecumseh Arena​. This could be used for my first or last name. The signs of the letters are supposed to make up your name and I thought this picture was a good choice because it also represents who I am. I have played hockey since I was very young and still play so it is fitting that I use a letter from the sign at the rink I play at. I have spent a lot of time at this arena whether it was for games or practice or fundraisers. Also I chose this because there isn't too many green signs like this and each letter was about 2ft by 1ft. 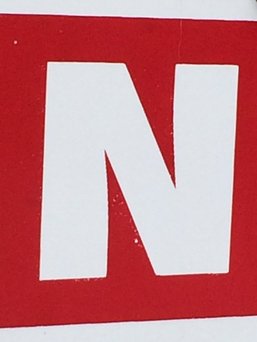 ​     This is a "N" from a no smoking sign This letter is in my first name. I like this sign because it used the negative space to make up the letter. It was also on a wall so I could very close to it for a nice clear picture. This also reflects who I am. I  I don't smoke and I think it is a terrible thing to do. 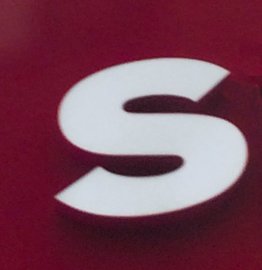 This is a "S" from Shoppers. This is the first letter in my name so this is the  important letter. I really like this sign because of the cool font and that the letters on the sign stick out from the background. I enjoy the colour as well. It is a dark shade of red, maybe cherry red. The letter was a good size, I would say about 3ft by 2ft. 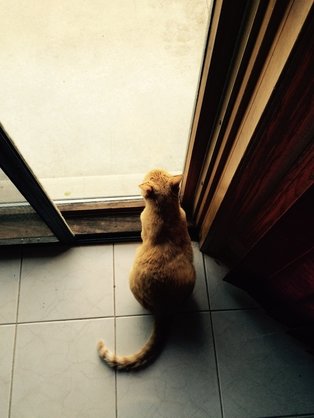 This is one of my favourite photos I have taken so far. This photo is of
my cat Tiger. I had to creep up behind him and I took it while standing.
I remember  the day I took it was a little bit cloudy and it was taken later in the day. I really enjoy the lighting in this shot and the
shadows. I just think its pretty cool how his tail is laying on the tile.
It almost seems as if he were posing. The siding of the doors and wall leads you into ​Tiger which is the main focus. 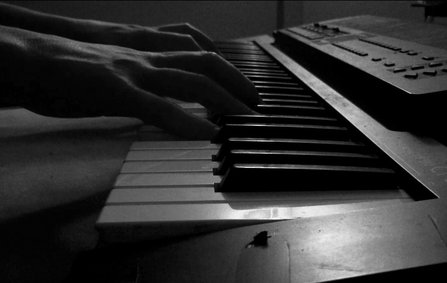 This is a photo of me playing the piano. I chose to turn this photo black and white to add more emotion giving it a sad feeling. I find a lot of my favourite songs that have the piano as the main instrument happen to be sad. Also, it goes well because of the black and white keys on the piano. I took pictures with the piano from many camera angles and I found the ones from the side turned out best. I like how the light shines off of the black keys and sides of the piano. Also, ​the lines created by the keys lead you into my hands. 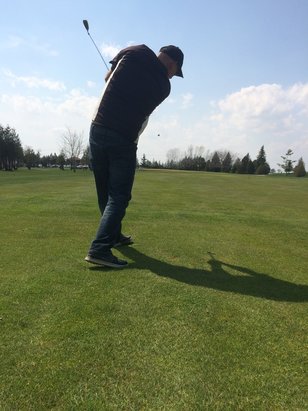 ​    This is my dad playing golf. This was his approach shot that he put on the green. That day we only played nine holes and this was the last hole. For this picture I had to crouch down to get a good angle. I like the nice green from the grass and blue from the sky. I also like this one because you can see the ball in the air right after he made contact with it. 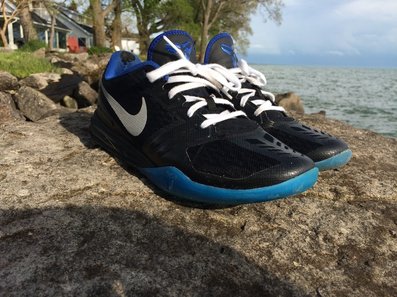 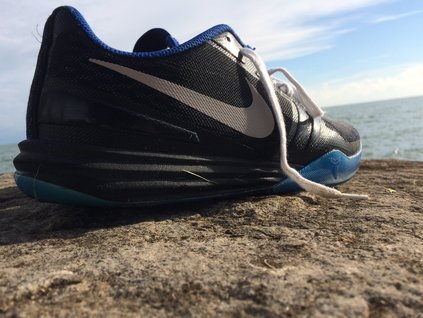 ​    This is a picture of my right shoe. My favourite part about this pictures is the textures. You can see the rough texture from the rock and the smooth textures on the shoe. Also because the picture is zoomed in so close you can the little details of the shoe that were't as noticeable from a distance. Like the Kobe logo on the side and the zigzag pattern on the sole. 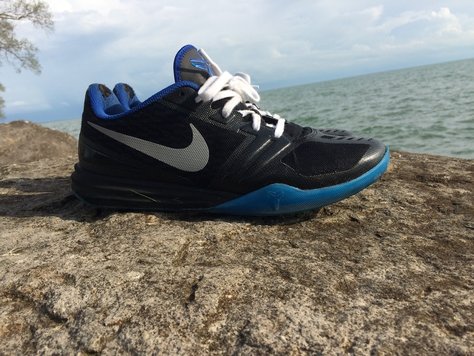 ​     This is a side view picture of the shoes. I feel like this angle gives you the best idea of what the shoe looks like. I really enjoy the background as it transitions from the rock, to lake and then the sky. For this picture I crouched down so I was level with the shoe. 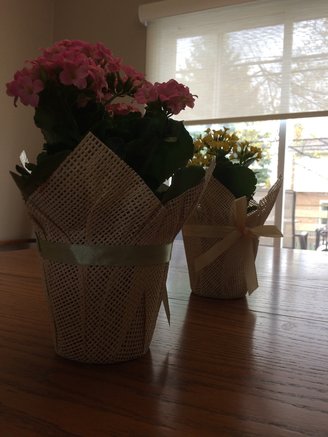 ​This is a picture of the flowers that were on my kitchen table on Easter. I feel like flowers are a big part of easter so that's why I took a picture of them. Especially flowers that are of Easter colours, pink and yellow. I took the picture from close and from a low angle to make the flowers to appear larger than in reality. I enjoy the lighting of this picture as it isn't very dramatic and gives the picture a calming feel. 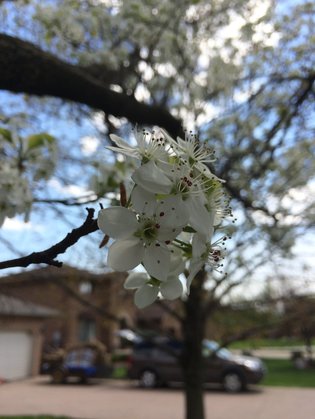 ​       This is a picture of the tree in my front yard. On Easter weekend, I walked past it and noticed how beautiful it was and had to take a picture of it. This was the first time I saw that the buds on the tree grew into pretty flowers. This ties in with the Easter theme because it is about new beginnings. On Easter Jesus rose and began his journey in heaven. Easter is in spring in which there is new life/beginning for many plants and other living things. For this picture I had to really zoom in so all the small details on the flowers could be seen. I used shallow depth of field.
Powered by